Awesome paper airplanes aren’t limited to the traditional delta or glider shapes. Here we’re going to learn how to make a paper airplane called the Hurricane, a round, circle or cylindrical paper airplane. Surprisingly this isn’t a new design, it’s been around for quite a few years that I know of. You can even buy a real one made out of plastic that flies like nothing you’ve ever seen! Called the X-zylo, you can pick one up at Amazon for cheap (see below). 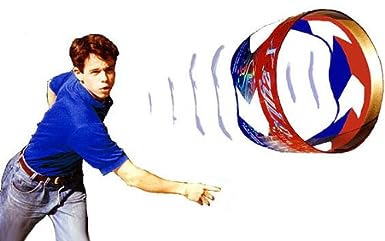 Here’s a great video of this amazing airplane, the X-zylo.

If you’ve read some of our other articles then you know about the dynamics of flight that make awesome paper airplanes fly. Specifically, the factor that provides lift on the wings of real airplanes is at work on this round paper airplane. The curved design of the wing allows for a shorter distance of travel on the bottom than on the top of the wing, creating an area of low and high pressure, with low pressure on top. Since the laws of science dictate that objects seek to move from areas of high pressure to a lower one, the effect is a lifting force on the wing (thus the plane).

Due to the folds used while making this round paper craft, the front lip has a similar high and low pressure effect, allowing the thing to fly pretty far. It’s precisely this incredible flight and the unusual and unsuspecting design of the Hurricane that makes it one of my favorite and awesome paper airplanes.

Perhaps this is, because frankly the definition of “airplane” has blurred considerably and now includes mere wings in it’s broad category… I have no problem lumping this into the epic paper planes group. Put it this way, the next time you’re hanging out with friends or at a party, and you roll up a sheet of paper and float it across the room, you’ll see from the faces of everyone there why it’s much more than one of the awesome looking paper airplanes… it defies expectations!

I have owned the Klutz Book of Paper Airplanes for many years (our son loved it) and in it they have instructions for making the Hurricane. Take it from me, the book is a must for families not just because of all the awesome paper airplane designs you can make with it, but because it’s designed in such a way that kids love learning about flight (physics) and how to make things fly fast, far or in loops. I highly recommend it to everyone… check it out at Amazon below and see from the reviews why this truly is the best book for kids that you can get on the subject.

The Hurricane Step by Step Instructions

Below is a set of pictures which will walk you through making this round paper airplane, and as you’ll quickly see, it couldn’t possibly be more simple. With each picture are simple step by step instructions. Simply click on the first image and a lightbox will open up with larger images that you can scroll through, which makes constructing this (and all of our paper airplanes) much easier.